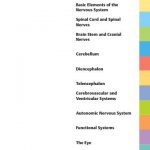 The number of students as well as colleagues in the field who have learned neuroanatomy according to volume 3 of the color atlas has been steadily increasing. Kahle’s textbook has proved its worth. What should one do after taking on the job of carrying on with this text book, other than leaving as much as possible as it is? However, the rapid growth in our knowledge of neuroscience does not permit this. In just the last few years many new discoveries have been made that have shaped the way we view the structure and function of the nervous system. There was a need for updating and supplementing this knowledge.

Hence, new sections have been added; for example, a section on modern methods of neuroanatomy, a section on neurotransmitter receptors, and an introduction to modern imaging procedures frequently used in the hospital. The Clinical Notes have been preserved and supplemented in order to provide a link to the clinical setting. The purpose was to provide the student not only with a solid knowledge of neuroanatomy but also with an important foundation of interdisciplinary neurocience. Furthermore, the student is introduced to the clinical aspects of those fields in which neuroanatomy plays an important role. I sincerely hope that the use of modern multicolor printing has made it possible to present things more clearly and in a more uniform way. Thus, sensory pathways are now always presented in blue, motor pathways in red, paraympathetic fibers in green, and sympathetic fibers in yellow.